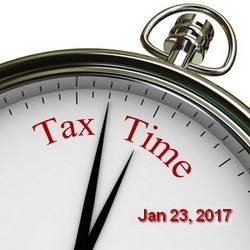 The nation’s tax season officially begins on Monday, January 23, 2017.   That is when the IRS will begin accepting electronic tax returns and processing paper tax returns.  While many software companies and tax professionals will be accepting tax returns before Jan. 23, they cannot actually submit your return until the IRS systems open.

According to the December 9, 2016 newsletter, the IRS expects more than 153 million individual tax returns to be filed in 2017.  Four out of five tax returns will be prepared electronically using tax return preparation software.  Certain taxpayers may need to prepare for some significant changes for this tax season, as highlighted below:

A new law requires the IRS to hold refunds on tax returns claiming the Earned Income Tax Credit (EITC) or the Additional Child Tax Credit (ACTC) until mid-February. Under the change required by Congress in the Protecting Americans from Tax Hikes (PATH) Act, the IRS must hold the entire refund — even the portion not associated with the EITC and ACTC — until at least Feb. 15th.

In addition, the IRS wants taxpayers to be aware it will take several days for these refunds to be released and processed through financial institutions. Factoring in weekends and the President’s Day holiday, the IRS cautions that many affected taxpayers may not have actual access to their refunds until the week of Feb. 27th, assuming there are no processing issues with the tax return and the taxpayer chose direct deposit.

Where's My Refund? ‎on IRS.gov and the IRS2Go phone app will be updated with projected deposit dates for early EITC and ACTC refund filers a few days after Feb. 15. Taxpayers will not see a refund date on Where's My Refund? ‎or through their software packages until then. The IRS, tax preparers and tax software will not have additional information on refund dates, so the Where’s My Refund? tool remains the best way to check the status of a refund.

Taxpayers will need their adjusted gross income from their 2015 tax return to sign their electronic tax return as the “electronic filing pin” is no longer an option.  This is especially important if you change your tax preparer or tax software product.  The IRS reminds taxpayers that they should keep copies of their prior-year tax returns for at least three years.

Despite these significant changes, the IRS state that they are “working hard to make this a smooth filing season for taxpayers.”  They still anticipate issuing more than nine out of 10 refunds in less than 21 days.  Choosing e-file and direct deposit for refunds remains the fastest and safest way to file an accurate income tax return and receive a refund.  To deal with these changes for the 2017 tax season, the IRS recommend that taxpayers simply “plan ahead”.